Community solar farms vs. rooftop solar power: which is best? 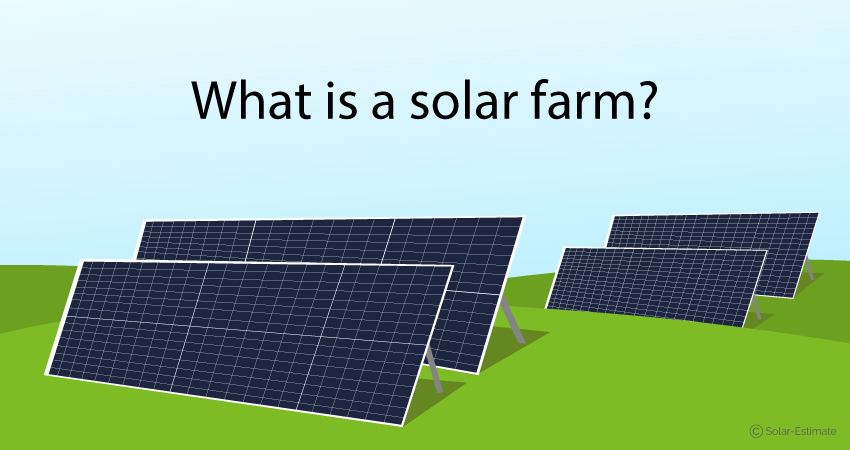 The Department of Energy (DOE) and the National Renewable Energy Laboratory (NREL) estimate that almost 50% of American houses are unsuitable for solar panels. This could be because of a lack of available roof space, shading issues, or a lack of a roof with a southerly aspect.

For this reason, there are now 42 states that have enacted some sort of community solar farm legislation, including all of the largest solar states. This legislation aims to allow those that can’t get solar panels themselves to still receive the benefits of residential solar.

What is meant by the term ‘solar farm’?

A solar farm is one of those terms that is used by different people to mean different things. For some people, it is used to describe a farming operation that is powered by solar electricity. Some farms use a lot of power and so are interested in reducing their ongoing operating expenses by installing a solar power system.

Other people use the term solar farm to refer to solar towers or concentrating solar plants (CSPs) that use mirrors and tracking systems to concentrate the heat of the sun on a central point to boil water and drive steam turbines. The Ivanpah concentrated solar project in the United States, at 392 MW, is the largest CSP solar power plant in the world. This type of concentrated solar power uses the heat from sunlight, and so is an example of thermal solar energy, which uses the heat in sunlight, as opposed to photovoltaic solar, which uses the radiation in sunlight.

However, most people use the term to refer to a community solar project where solar panels are installed in one central location, but individual residents can buy the virtual production of a few kilowatts of these panels. The production from these solar panels is then credited to their bill. This type of solar farm is what this article will focus on.

Community solar farms are developed by corporate solar developers in much the same way that corporate housing developers release new land subdivisions for building new homes. They will typically install between 2 and 20 megawatts (equivalent to 2,000 to 20,000 kilowatts) of solar panels at a single location in the service territory of a particular utility. These solar arrays can be up to 100,000 individual modules in one field.

Individual electricity users in the same area can then buy parcels of solar panels within the community solar farm. They can buy as little as 1 kW, but typically most people buy between 4 kW and 8 kW to match the amount of energy their home consumes. The utility is mandated by the Public Utilities Commission to give you credits for your portion of the generation from the solar farm as if you had generated that power on your home; this is why it is sometimes called ‘virtual net metering.’

What are the advantages of a community solar farm over rooftop solar?

I happen to like the look of solar panels on my house — but many people don’t. Having virtual net metering from solar panels in a community solar farm means you can get the same economic benefit of having solar panels on your home without the aesthetic impact.

Obviously, you can’t get rooftop solar if you rent the home you live in. With the current cost of solar panels, some generous solar incentives and the investment tax credit (ITC) (also known as the solar tax credit) the return on investment from installing solar panels is very high. Many argue it is unfair that the least wealthy people in our society are denied the chance to profit from installing photovoltaic panels to supply power to their homes that is afforded to homeowners by the current level of subsidy given to rooftop solar.

I have sympathy with this view, and this is why I think legislation should make much larger capacity of community solar farms available.

Some folks are concerned that an investment in solar will be lost if they move house and so don’t get the full economic advantage of the savings over time.

As it turns out, this is not the case as studies have shown that in the mid-price range of housing stock, houses with solar panels sell for around $20,000 more than houses without solar panels.

Given a typical residential solar system now costs far less than $20,000 after claiming the 30% solar tax credit, then it is unlikely you would lose money even if you moved home only six months after an installation. That being said, most people planning to move would prefer to buy into a solar farm if they’ll still be within the same utility area.

Many homes are simply unsuitable for solar panel installation either because they lack the required square feet of roof space (around 400 square feet for a 6 kW system), because they are shaded, or because they do not have an orientation towards the south. (Solar panels produce most electricity when facing south because in the northern hemisphere the sun always comes from the south). Solar panels are generally oriented in a solar farm for maximum production and away from any shade.

You do not need to worry about maintaining solar panels you own in a solar farm. With rooftop solar, although warranties are offered by solar installation companies, it is up to you to monitor your system and then chase them up if you think your system may not be working properly. Most solar companies are very slow to do warranty investigation or repairs, so it can be quite a hassle.

What is rooftop solar?

Rooftop solar is a phrase used to describe when solar panels are installed on the roof of the building using the power, whether this be a home or business premises.

How can I calculate how much rooftop for solar panels will save installed on my home?

This solar panel cost estimator will allow you to calculate:

Would I buy into a solar farm or buy rooftop solar?

Given the option, I would buy into a community solar farm because I like the idea of not having to worry about maintenance.

However, I would read the documents carefully, and I would want to know that the land is owned by a company that is not under the threat of a corporate collapse. It is unclear what the legal fallout would be if a community solar owner went bankrupt. There is also a concern that if they sold off the project to another company the maintenance may not get done.

In some instances, the legislation creating a community solar farm guarantees a longer period of 1-for-1 virtual net metering than the net metering contracts offered to homeowners for rooftop solar in that utility area. Where this is the case, it would also make me lean towards a solar farm.

On the other hand, there are also places where the opposite is true, i.e., the credit given on your electric bills from the generation of the solar panels you own in a community solar farm is less than the retail rate of electricity. This has specifically been a problem in California, where owners of panels in community solar projects have been offered far less per kWh than the value of the net metering credits they would get under NEM 2.0 if they had the same solar panels installed on their house. For this reason, a rooftop solar power system installed on your house is a better way to go in California. However, in other states like Minnesota and Massachusetts, the community solar legislation makes this option far more attractive.

The other situation in which I would prefer a community solar project over my own rooftop solar system, is if I was considering moving home within the same utility territory, because although solar would add value to my home’s sale price, I would not want to go through the process of installing it again on my new house.

Get a quote for solar panels for your home today

Get a quote for solar panels for your home today