Solar power technology has been around for a lot longer than many realize. Throughout its development, the technology has seen countless transformations with increased increments of efficiency and eventually a drop in prices that made it available for residential and commercial use. Most of the major developments that led to residential applications came about in the past few decades, but the story starts with how the first steps towards harnessing solar power go all the way back to the 1800s.

How was Solar Power Discovered?

The first major breakthrough in solar power was made by a 19-year-old Alexandre-Edmond Becquerel in 1839. During an experiment, Becquerel discovered that silver chloride could generate voltage and current when exposed to light under the right conditions. His discovery became known as the photovoltaic effect, or, alternatively, the Becquerel effect. It was this same discovery that provided the basis for the development of the first solar cell in 1888 by Aleksandr Stoletov.

How did the Technology Progress?

Solar power remained relatively obscure until a 1904 paper by Albert Einstein brought the attention of the American scientific community to the photoelectric effect described by Stoletov.

Over 50 years later, Bell Laboratories would go on to develop the first modern photovoltaic cell. These cells operated at a much lower efficiency than would make them practical for residential or commercial use, but they turned out to be effective in supplementing another exciting technological advance: space exploration. With further development of solar tech, the Vanguard 1 was the first spacecraft of many to come which would use solar power as a backup power system after its launch in 1958.

How did Solar Power Make It to Homes?

Solar power technology continued to see advancements throughout the 60s and 70s. By the 90s, efficiency had risen, and costs of implementation had decreased to the point where residential application started to become widespread. With the drastic decrease in prices throughout the 2010s, solar power became a major source of sustainable energy in the US. By 2016, the United States was producing enough from solar energy to power 6.5 million households.

How did the Efficiency of Solar Cells Develop over Time?

For a little perspective, the solar cells developed at Bell Laboratories were operating at around 1% efficiency. The cells used on the Vanguard 1 operated at around 10% with the most expensive and cutting-edge technology. Mono and poly solar panels commonly used in homes today operate between a 13-22% efficiency rating.

What Are the Price Trends for Solar Panels?

With higher efficiency, government incentives, and improved technology, the prices of residential solar panels continued to plummet, particularly over the past decade. Ten years ago, a residential photovoltaic system could cost more than $50,000.00. Prices have dropped more than 60 percent in the past several years, with the average upfront cost for the commonly used 6 kW system landing between $16,200- $21,420. Trends have continued until recently with a report from the NREL that showed the price per watt of solar energy dropped by 27% in the first quarter of 2017 alone. 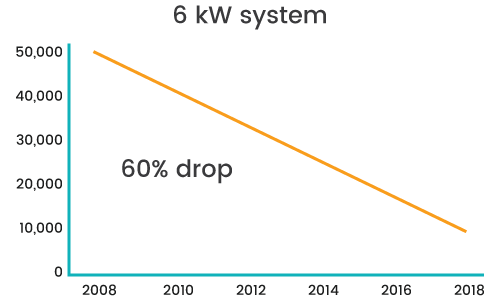 Is Going Solar Worth It?

Your return on investment or payback period depends on several factors including regional tax incentives, local energy prices, and the annual amount of sunlight in your area. The average price per watt ranges based on region between $3.24 per watt in Louisiana to $4.73 Rhode Island – before taxes and incentives, assuming the purchase of a 5kW peak DC capacity solar system. If you’re thinking about going solar, it’s worth taking some time to crunch the numbers. Luckily there are online resources to calculate your savings based on region.

Calculate your solar savings based on your region

What’s on the Horizon for Solar Technology?

Technological advancements in solar power continue to march forward with functional and aesthetic innovations. To name just a few, some of the up and coming developments in solar tech include:

Hot solar cells are still in the research phase at MIT, while the rest of these technologies are either already commercially available or undergoing the early phases of implementation.

With the continued advancement and ever more creative implementations, there’s no doubt that solar energy will continue to grow as a power source for residential, commercial, and industrial uses. Current solar power technologies are at an exciting turning point with a new renaissance around the corner. In the meantime, it’s safe to bet that the efficiency of solar panels and residential application of solar technology will continue to grow.

See your return on investment, payback period, regional tax incentives, local energy prices, and the annual amount of sunlight in your area

See your return on investment, payback period, regional tax incentives, local energy prices, and the annual amount of sunlight in your area