Hybrids versus electric cars 2019: Which is the best car for you? 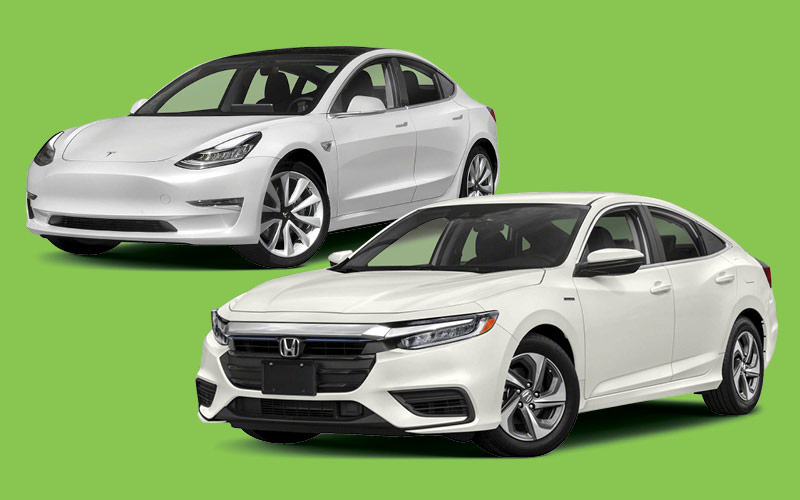 Hybrids versus electric cars 2019: Which is the best car for you?

If you're looking to purchase a new car this year, then you might want to consider ditching the typical fuel-guzzling vehicle and going electric instead. Fuel-powered are not only expensive to maintain, but they're not exactly environmentally-friendly either. [According to the EPA, a fuel-powered car that gets around 22 miles to the gallon produces roughly 4.6 metric tons of carbon dioxide every year.]

As you do your research, you'll find that you have two options to consider—an all-out electric vehicle, or hybrid vehicle. The following is a thorough overview of the differences between hybrid versus electric cars, designed to help you make a more informed purchasing decision.

What is a hybrid vehicle?

A hybrid vehicle is a cross between a gas-powered and electric vehicle. A hybrid car contains both an internal combustion engine that's used by gas-powered vehicles as well as an electric motor, which has an attached rechargeable battery pack.

It's worth noting that there are two types of hybrid cars. The first is a standard hybrid car, which uses regenerative braking along with its internal combustion engine in order to recharge its battery pack. The other type of hybrid car is the plug-in hybrid electric vehicle (PHEV for short), which can be plugged into a charging station to replenish its battery pack.

What is an electric vehicle?

You'll never need to gas up, although you will need to plug it in to recharge its battery, which is quite large and contains at least one electric drive motor wired to it. Electric cars also use very complex software as a result of the battery's large size.

What should you consider when choosing between hybrid vs electric?

There are a lot of factors that you'll want to take into account when choosing between a hybrid car and a fully electric car. These include:

Is a hybrid car a good option for you?

Hybrid cars are certainly efficient, especially since the internal combustion engine won't kick in until your battery runs out. This means that it can run just like a fully electric car as long as you keep it charged up, which isn't difficult if you have a plug-in hybrid. Because plug-in hybrids can be plugged into normal outlets, you can leave it charging overnight at home. Not only can you benefit from not having to pay to gas up your car, but you won't be leaving a carbon footprint behind either.

However, the real advantage of a hybrid car is if you ever take longer trips. Because of the ability to switch to an internal combustion engine, a hybrid car has a great deal of range. If you have a long commute to work or you live in a more rural area, a hybrid is an excellent option since you can still reduce your carbon footprint and limit the costs of gassing up compared to a traditional fuel-powered vehicle.

Is an electric car a good option for you?

Electric cars are the most energy-efficient option on the market. At this point in time, they perform great (electric cars have a lower center of gravity, which makes handling better) and some models have a decent range as well.

It's worth noting that while their range has improved, it still doesn't compare to the range of hybrid or traditional fuel-powered vehicles. For instance, the 2019 Tesla Model 3 Long Range has been lauded for its impressive range of 310 miles, well above other electric car in its segment—but you'll have to pay a premium price for it. By comparison, the 2019 Honda Insight, a hybrid sedan, has a range of 551 miles.

Comparing the upfront costs of a hybrid car versus an electric car is difficult because of all the different models that are now available on the market. Based on range, electric cars are going to be more expensive. If you want a higher range, you're going to have to pay for it. This is because a higher range requires a bigger, more powerful battery.

One of the reasons why electric cars are more expensive is not only due to the need for more powerful batteries to increase their range, but also because of the complex software required to operate the car. However, this is only taking into consideration the initial costs. When it comes to ongoing costs, things are a little bit different.

How much does it cost to maintain and drive a hybrid?

When it comes to maintenance costs, a hybrid car will most likely cost more to own than an electric car.

The reason is simple: a hybrid car has all the moving parts of a fuel-powered car. When you have moving parts inside of anything, they are likely going to experience wear and tear over time, which, in turn, may require repair or replacement. In addition to potentially having to pay for repairs or replacements when it comes to the internal combustion engine and its many components, you will also need to pay for gas, even if it's not as often as you would for a traditional gas-powered vehicle.

You'll also need to pay for basic tune-up costs, such as having your oil changed. How often you need to have your oil changed depends on the model hybrid you drive. For example, a newer Toyota Prius requires an oil change after the first 5,000 miles or the first six months.

How much does it cost to maintain and drive an electric vehicle?

Electric cars are a lot more affordable to maintain than any other type of car.

The only thing you're really paying for — besides changing out your tires periodically, which is required for every type of vehicle — is electricity. Electricity happens to be much cheaper than gas. You will have to pay to replace your electric battery eventually, but the costs of electric batteries have been declining every year; and it's something you'll have to do with a hybrid car as well.

Are there rebates or incentives on hybrid or electric vehicles?

One of the advantages of buying a hybrid or electric vehicle instead of a gas-powered vehicle is that there are both state and federal rebates and incentives available that can offset the initial costs. For example, there's a federal tax credit available on both electric cars and hybrid cars bought in or after 2010 for upwards of $7,500.

State rebates and incentives for purchasing a hybrid or electric vehicle vary from state to state. For example, in California, there are rebates available for upwards of $2,500 via the Clean Vehicle Rebate Project.