YES: The case for buying the Tesla solar roof

Let’s start with the good, because it’s Tesla, and we can always count on them to deliver something exciting!

The Tesla solar roof is a quintessential Tesla product. It represents everything that the Tesla and Elon Musk brand stands for: cutting-edge technology with a groundbreaking design. One that makes caring for the environment look oh so good.

I mean, look at those solar panels. Can’t see them? Exactly. Tesla has done some pathbreaking design work. As with their electric cars, they have changed the way we look at solar panels forever.

The sustainable circuit of Tesla Inc.

Elon Musk’s grand vision has always been to help humans transition to 100% renewable energy, which starts with generating solar energy, storing it, and then using it to power our home and vehicle. The Tesla solar roof is an important step in actualizing this vision. Tesla’s solar app depicts this circuit in a beautiful, yet simplistic way.

Imagine this: having a Tesla solar roof, with a Tesla battery pack installed in your garage, and a Tesla car parked in front of the house. Now wouldn’t that make you the most elegant looking environmentally conscious person in the neighborhood?

It's the inevitable future of solar production

As the cost of solar cells becomes cheaper and more competitors enter the market, we can expect that most solar systems will take the form of solar roofs. Demand will grow, making supply even cheaper, which in turn, will push demand even higher. Roofs with solar tiles are likely to one day become the norm, this future might be 10 years away, or 20 or perhaps 50, but it is inevitable.

NO: The case for not getting the Tesla solar roof

In spite of all that is inspiring and revolutionary about Tesla, there are problems that we simply cannot ignore.

Tesla’s solar shingles are too expensive

You can calculate the cost for a Tesla solar roof and compare it with the price of a standard solar installation here. To understand the difference in cost, read this breakdown comparing solar roof tiles versus conventional solar.

Unfulfilled promises and the financial mess

Since its grand launch in Oct 2016 Tesla’s solar roof tiles have faced production issues. Its solar panels have gone from merely being an overpriced product that few people can afford, to becoming yet another produce that Tesla failed to deliver on.

Tesla’s acquisition of SolarCity has not been a smooth one or even a profitable one. Tesla had taken over SolarCity at the price tag of $2 billion, but SolarCity was also $2.9 billion in debt at the time. Which made it a $5 billion dollar acquisition. There is also the problem of delays due to technical problems and change in design plans.  Inconsistent profits and excessive delays have more than dampened the buzz around the Tesla solar roof. 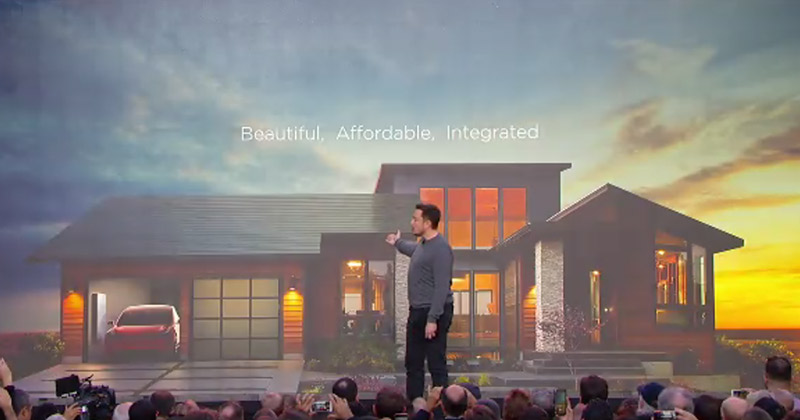 Solar roof prices about to drop?

In April this year, Tesla slashed the cost of its standard solar panels to about 16% lower than the national average price, which has lead to a renewed interest in their solar panels. In addition, the head of Tesla’s solar business Sanjay Shah said that further announcement will be made about the Tesla solar roof tiles in the second half of 2019. Are there reduced solar roof prices on the horizon?

Whereas this potential announcement sounds good, do not hold your breath for it. Firstly, it is unlikely that Tesla can make the roof tiles match the cost-effectiveness of standard solar panels anytime in the near future. Secondly, the financial trouble the company is going through puts in doubt the very existence of the company, forget any substantial reduction in price.

Solar panels are becoming mandatory in 2020

What could be one of the biggest game changers for the future of solar panels in general and also the Tesla roof tiles, comes in the guise of policy changes in California. The state regulators have made it mandatory for newly built single-family homes to have solar panels from 2020.

The one thing which is guaranteed to help bring down rates and propel future innovation in the solar roof tiles industry is competition. And Tesla has some stiff competition coming their way.

Standard Industries Inc., one of the largest roofing companies in the world, has started offering its own version of a solar roof. PetersenDean Roofing & Solar started offering panels five years ago as well. They have already done 9,800 installations in 2018 and are on track to double that this year.

As of yet, none of these companies match Tesla’s innovation and design. But, Tesla will need to keep innovating and improving if they want to stay at the top of the heap in the near future.

VERDICT: Solar roof tiles are the future, not the present

Like most other Tesla products, the coming together of exquisite design and breakthrough technology in the Tesla roof panels rekindles our belief in the human species. Tesla has shown us what is possible.

However, at this point in time, Tesla is far from ready with its product. There are little to no choices for the customers in the market. So, unless you have a couple of extra grand lying around and insist on feeling like you’re living in the future, the Tesla solar roof tiles make little practical sense.

Find out who are the best solar panel installers in your area!

Find out who are the best solar panel installers in your area!