Tesla Powerwall: Everything you need to know

Published on October 22, 2019 by Catherine Lane


In 2015, Tesla entered the home energy storage market with CEO Elon Musk’s release of Powerwall, the company’s battery storage system which allows homeowners to increase both their energy independence and savings on their electric bills. The system’s most recent model, Powerwall 2 AC, is the largest home battery Tesla has offered yet. 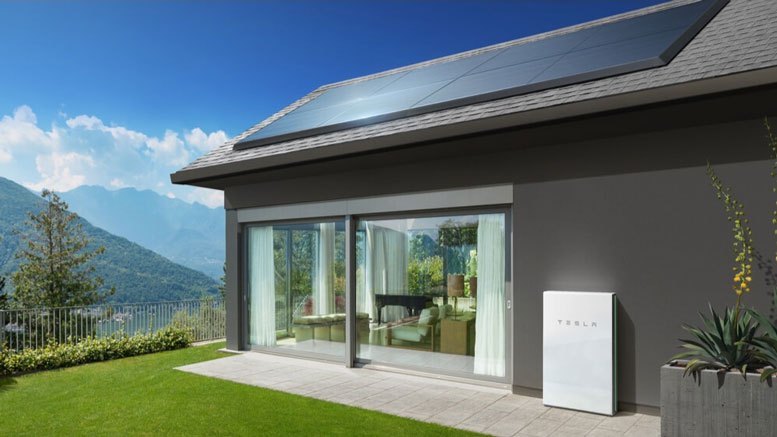 Thanks to Tesla’s previous success as an electric vehicle manufacturer, it didn’t take long for buzz to start around Powerwall’s release. Tesla’s popularity and reputation is what prompted the conversation on home battery storage to open up, making it a viable option for homeowners, instead of just a dream for the future. 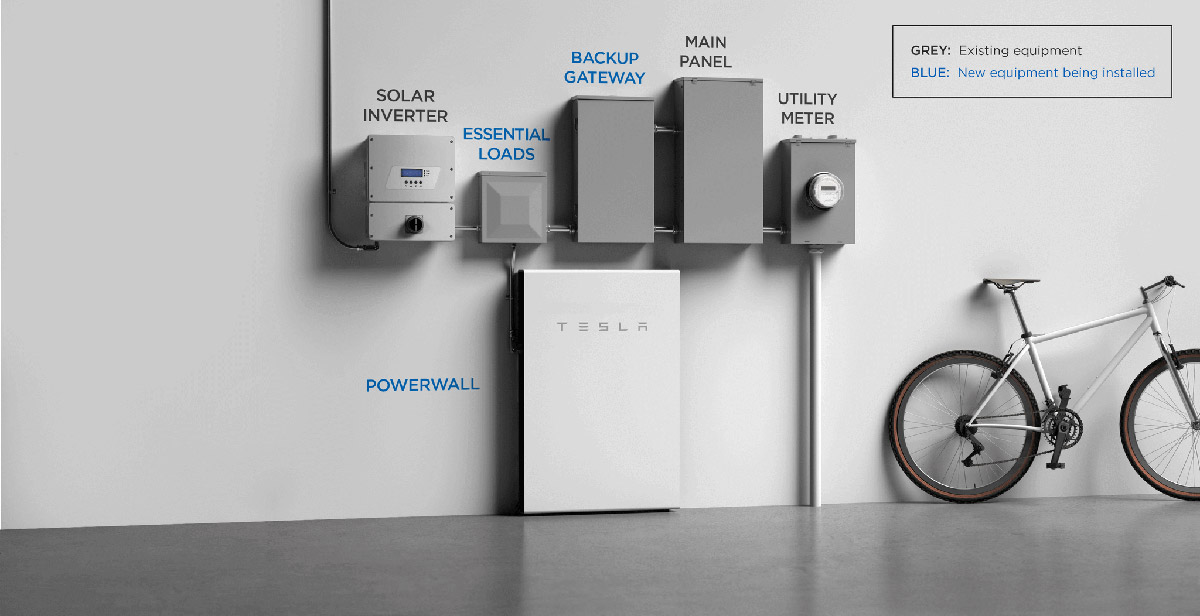 There are 2 main components of the Powerwall battery system:

Backup Gateway is a management system that learns about your energy usage over time, allowing you to effectively manage your energy storage based on your home’s energy needs.

Powerwall was designed to make homes less reliant on the grid by storing excess power from solar panel systems to be used later. Plus, homeowners have the potential to save a lot of money with energy storage.

There are many benefits to installing a Tesla Powerwall system. Energy storage systems allow people to be less reliant on the grid, accumulate savings, and, when coupled with solar technologies, lower their impact on the environment.

Powerwall, combined with a solar panel system, can potentially serve all of a home’s energy needs. The battery energy storage system will store the excess electricity a solar system produces and then release it to the home later, so no power will have to be purchased from the grid.

Being less dependent on the grid also means that homes will be less affected by power outages. Typically, in the event of a power outage, grid-tied solar panels are automatically disconnected from the grid and shut off, so they are no longer producing electricity. This prevents solar-generated electricity from leaking into the grid and potentially causing injury to utility workers performing repairs.

With Powerwall, your home will be disconnected from the grid during a power outage. However, your solar panels will still be able to power your home and charge your battery through backup power, which can sustain your household energy needs through multi-day outages.

This feature is especially useful in places that are vulnerable to extreme weather conditions with high potential to impact the grid. And with severe weather events becoming more and more commonplace, the benefits of Tesla Powerwall become exceedingly valuable.

How much does Powerwall cost? Are there incentives?

Tesla estimates the cost of installing a 1-battery Powerwall system to come to at least $10,100, not including taxes or local permitting fees. The following is a breakdown of the estimated costs:

Estimated Cost of a Powerwall System

The cost can also vary greatly, depending on the system size, design, and the location it is being installed in.

Luckily, there are a variety of federal, state, and utility incentives for installing Tesla battery storage. If battery storage is connected to a new or existing solar panel system, it qualifies for the 30% federal solar tax credit.

One of the most notable battery storage incentives is California’s Self Generation Incentive Program (SGIP), through which you can receive a rebate of $4,600 when you install Powerwall through one of Tesla’s certified installers. The rebate amount decreases as more people enter SGIP, so the sooner you add battery storage, the better chance you have of receiving a larger incentive.

How does Powerwall work?

The Tesla Powerwall can be charged either from the energy produced by a solar system or directly from the electric grid. The energy is then stored until the home needs it, including when solar panels are not producing energy.

Powerwall can discharge 5 kW of continuous real power. This means that your home (appliances, outlets, lights, etc.) can be powered continuously by Powerwall, as long as everything running in the home combined can be powered by 5 kW of power or less. In the event of a power surge, Powerwall can increase the amount it releases to 7 kW, however, this can only last for 10 seconds at a time.

Powerwall can be operated in 3 different modes, each of which dictating exactly how and when it will charge and discharge. The mode options are: 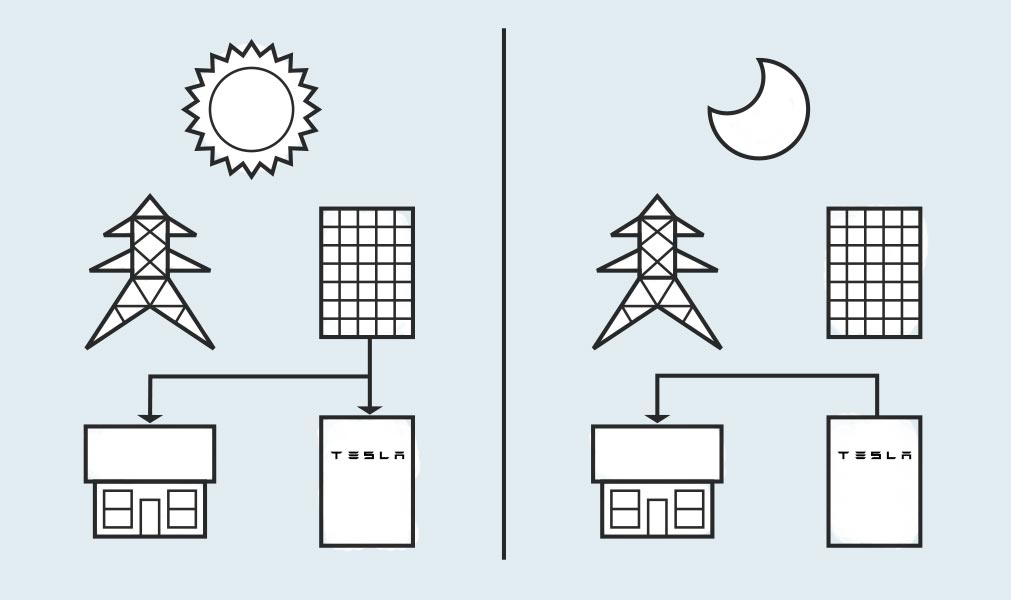 Powerwall will be charged by the excess energy your solar system produces throughout the day. The stored energy will be used by your home at night when the solar system is not producing enough electricity to cover all of your energy needs. This mode has the potential to run your home entirely from a clean energy source. 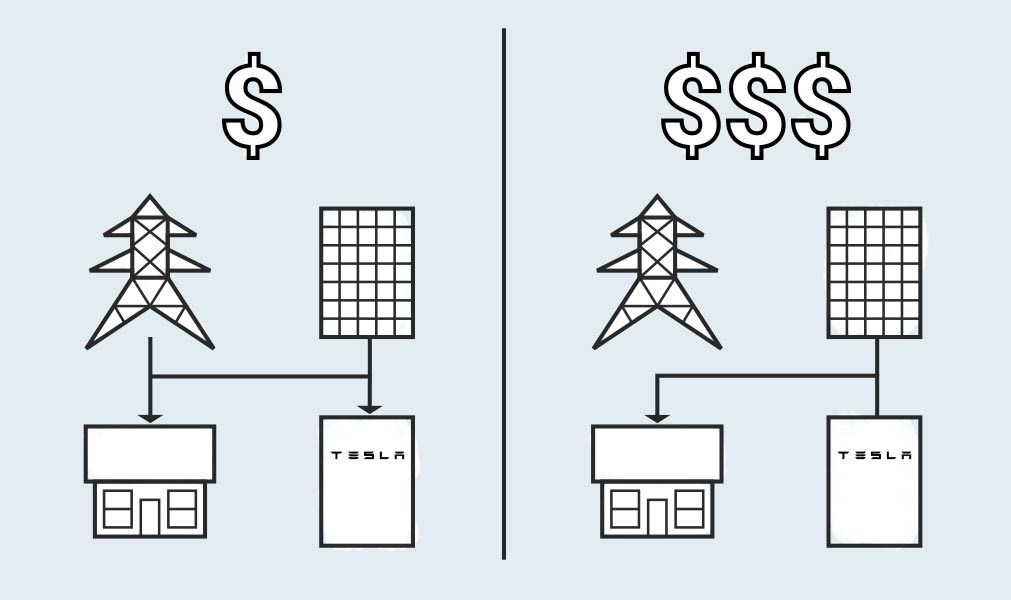 Powerwall will run a forecast on your energy usage and solar production to prioritize when the system should charge and discharge electricity, based on the pricing of time-of-use rates. 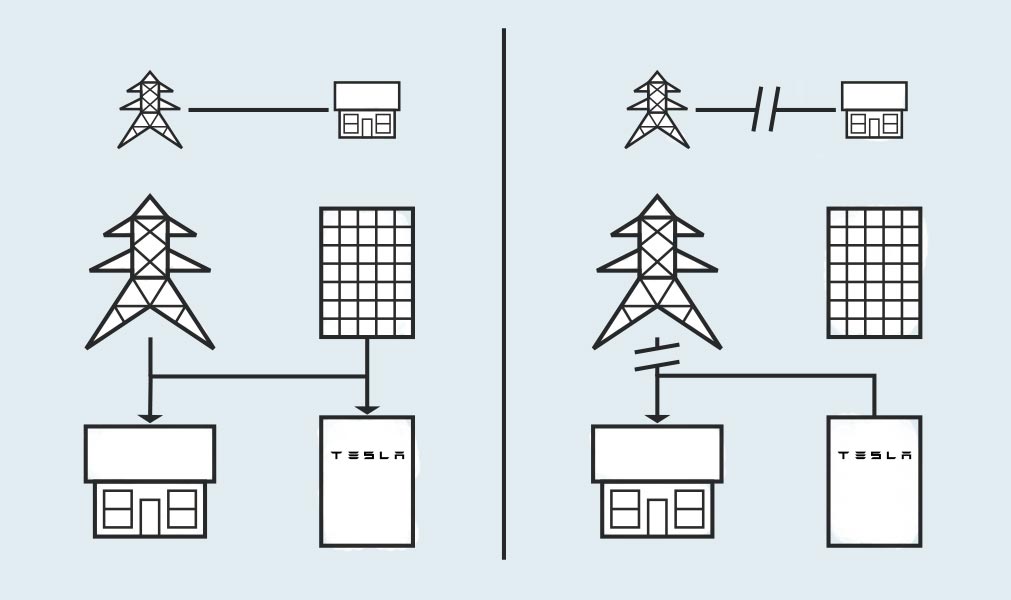 Powerwall will charge with solar energy or from the electric grid, but it will only release energy in the event of a grid power outage. Powerwall can be used to back up your whole home, or to back up only essentials such as lights and outlets, leaving out energy-intensive loads like air conditioning. If it is being used primarily as back-up power, it might not qualify for certain incentives or rebates.

You can install anywhere from 1 to 10 Powerwall batteries for residential installations, depending on your energy needs. Multiple Powerwalls can either be stacked on top of one another or mounted to the wall, side by side. Systems can be installed indoors or outdoors, but it is recommended to have Powerwall installed indoors in places where outdoor temperatures regularly go below 32°F or above 86°F.

However, in the event that it is stored outdoors, Powerwall is designed to account for the impact of various weather conditions. 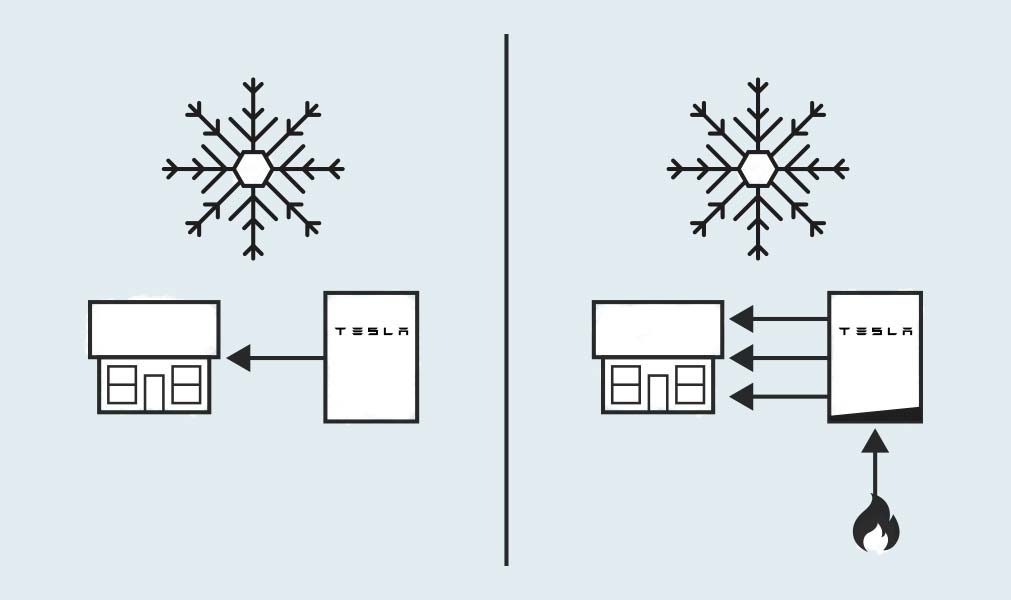 Powerwall also has the ability to communicate with the National Weather Service so the system can prioritize charging the battery to maximum capacity when severe weather is predicted.

How long does Powerwall last? What types of warranties are there?

Powerwall has a 10-year limited warranty that guarantees the system will be defect-free for 10 years after the installation date. However, the warranty only covers damages that are within Tesla’s control. Things like storm damage, flood damage, or damages caused by failing to comply with the owner’s manual will not be covered under the warranty.

The warranty also states that Powerwall’s capacity will not be less than 70% of the original capacity by the end of the warranty. Tesla’s battery, much like other rechargeable batteries, loses its ability to hold a charge, as it is continuously recharged. You’ve probably encountered this scenario with electronics in your home, such as a laptop. A new laptop can hold a charge longer than a laptop that is a few years old.

Powerwall is designed so the battery’s capacity stays above 70% of the original capacity, even if 100% of the stored energy is regularly discharged. Based on Tesla’s warranty terms, your Powerwall should have a usable capacity of no less than 9.45 kWh at the end of 10 years.;

How to buy Tesla Powerwall?

Powerwall can be purchased directly through Tesla or through a Tesla Certified Installer. A $99 deposit is required at the time of ordering Powerwall. Certified installers can be found through Tesla’s website. 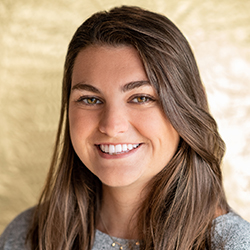