When should I clean my rooftop solar panels? 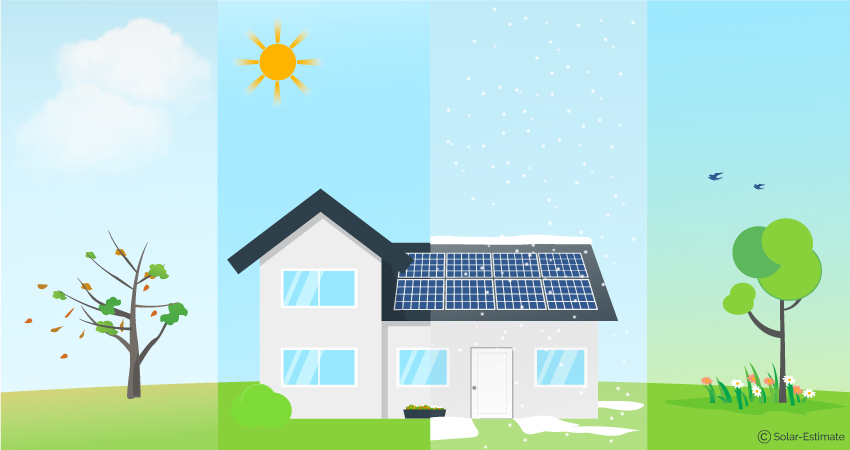 Solar panels are made to last for decades, passively absorbing sunlight and converting it into electricity. Thankfully they usually don’t need too much maintenance, including washing, but sometimes they do. How often depends on a number of factors, ranging from where you live to the angle of your solar panels.

Dirt and particulates on solar panels can impact their ability to produce electricity. A study from Duke University in 2017 found that airborne particles and their accumulation on solar cells can reduce the ability of a solar cell to produce energy by up to 35 percent in certain parts of the world, like India and China.

"My colleagues in India were showing off some of their rooftop solar installations, and I was blown away by how dirty the panels were," said Michael Bergin, professor of civil and environmental engineering at Duke University and lead author of the study. "I thought the dirt had to affect their efficiencies, but there weren't any studies out there estimating the losses. So we put together a comprehensive model to do just that."

Cleaning those solar systems significantly increased their efficiency after several weeks of collecting dust. But the study also found that cleaning panels too often can lead to damaging them, reducing their efficiency as well.

In the US the amount of pollution and dust in the air is usually much less than in places like India and China. The study found that the “nugatory” dust that covered panels in India was much less likely to have an impact in the US. But in certain areas and environments in the US you’re more likely to need to clean solar panels than in others. These include places where there’s little precipitation and a lot of particulates, like dust, in the air. Areas like the US southwest, for instance.

The most important factor when it comes to how often you need to clean your solar panels is tilt. Numerous studies have found that solar panels mounted flat need the most cleaning. Whereas solar panels on a tilt will shed most of the dust and dirt, as well as other things—like bird droppings—that could impact your solar panels’ production. Since solar panels are usually covered in a highly protective, smooth glass, most dirt, and grime will wash off with just a little rain or snow. Even on a tilt angle as low as 5 degrees.

How often do you have to clean your solar panels?

You may want to clean your solar panels on a quarterly basis or a semi-annual basis. You’ll want to clean them more if you live in an arid area or an area where there’s a lot of particulate matter in the air, like tree pollen or pollution.

If you live in an area that gets a decent amount of rain, you may only need to clean your solar panels once a year. Or during an extended drought.

When should I clean my solar panels?

There are two times you should clean your solar panels. First, if a visual inspection reveals that they are dirty and second if you’ve noticed your solar rooftop is producing less energy than it has in the past or should.

Sometimes it might be a maintenance issue, like a solar panel that quit working properly. But sometimes it the panels are a little dirty and the sunlight can’t reach the photovoltaic cells to convert it into electricity.

How do you clean solar panels?

Clean your solar panels like you clean cars or windows. Use water and an environmentally friendly soap that easily rinses off. Dish soap cleans your panels as well as other options.

There are some differences, however. Before cleaning solar panels turn the system off to reduce risk of shock or shorting anything in the solar panel system out. Don’t clean your system in the middle of a hot day. All that solar energy makes the panels heat up quickly. While the glass that protects them is strong and durable, the rapid deluge of cold water could cause damage to the glass over time. It’s much better to do it in the morning or evening when the panels are cooler, or on an overcast day.

If your solar panel system has a lot of dust on it and is easily accessible, brush off any dust with a soft-bristled broom or soft brush before applying soap and water. This will make the rest of the cleaning quicker and easier and reduce the risk of a muddy film getting stuck on the panels. Easily accessible systems are usually ground-mounted or on a one-story roof. There are systems where you can wash the PV panels from the ground. If you’re going any higher than that it’s safer to use a high-pressure hose to wash them.

Extendable RV cleaning brushes are a great option for cleaning solar panels that you can reach from the ground. Plus some attach to a hose and allow you to add soap as you wash the solar panels off.

If your system is on a second-story roof you can still clean it. But rather than climbing up ladders or working from the roof to clean the system, you can use a high-pressure hose attachment—not a power washer—to wash the panels. Like the RV brush, these attachments can also include a dispenser for soap, making the process pretty easy.

If your rooftop solar system is higher than two stories, or if you don’t feel like cleaning the solar array yourself, there are plenty of companies that provide solar panel cleaning. Your solar installer will know some of them or might offer a cleaning service themselves.

Getting a solar panel system cleaned isn’t too expensive. You can easily hire a professional, but you also don’t want to spend more on cleaning your solar panel system than you’re saving on your electric bill from the solar energy your system produces.

Some companies charge on a per panel basis and costs shouldn’t exceed $10 per panel in most cases and areas. At $10 per panel, a 5-kilowatt solar rooftop system with 20 panels would cost about $200 to clean. Other companies offer a flat rate for solar panel cleaning fee based on the solar installation size and number of panels. Those costs often range between $150 and $300.

Can you use a pressure washer to clean solar panels?

It’s not recommended that you use a power washer to clean solar panels. They’re made to withstand decades of sun, rain, sleet, and snow, but a power washer up close or at too high a pressure setting could damage the protective glass.