What is a Power Purchase Agreement?

A solar PPA, or power purchase agreement is similar to a solar lease in that the solar panels remain owned by the solar company (actually third party investors) rather than the homeowners during the term.

The only real difference between a lease and a PPA is that with a PPA there is not a fixed monthly fee there is just a charge for the kWh (kilowatt hours) of power produced by the solar panels.

The idea is that this charge, usually in the range of 14-17 cents per kWh is less than that average cost per kWh that the consumer is paying to their utility.

For this reason solar leases and solar power purchase agreements have mainly been common in states where there are high electricity prices.

State based legislation is also needed to allows third party ownership of panels to work effectively and this is why some of the big solar leasing and PPA companies are not in some states. The sale of electricity is a regulated activity and so these products need legislation to protect them from all of the requirements of a public utility, the only other people licensed to sell electricity.

During 2013 and 2014 solar leases and solar PPA's became the dominant financing used by homeowners to install solar panels because back then to buy solar was still expensive, around $5 per watt making the zero down lease and PPA products attractive.

However, zero down lease and PPA agreements are starting to lose market share for three reasons:

To illustrate this point. If you buy a 5kw solar system outright for $3.50 per watt before incentives then even in a state that has no incentives other than the 26% solar tax credit you will produce between 5,800 and 7,500 kWh per year (depending where you live) for 25 years totaling between 145,000 and 187,500 kWh over the minimum warranted life of the system.

Even the cheapest solar PPA agreement you will see is at 14 cents per kWh(with an annual escalation in that fee over the life of the agreement).

What this shows you is that your savings are likely to be double or more with a cash purchase than with a solar lease or PPA agreement. You can compare the savings with each option using the solar panels calculator. 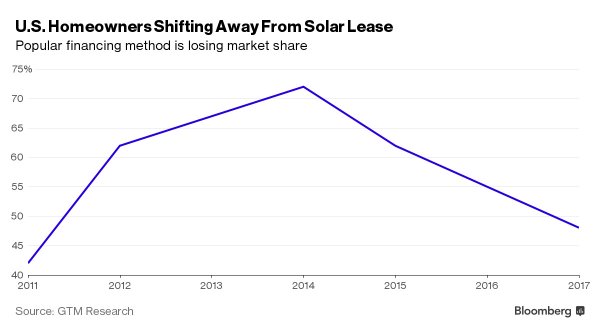 At the end of the lease term, usually 15 or 20 years you own the panels for a nominal payment.

The idea is that the lease fee should be less than the monthly power bill savings that the solar panels are giving the homeowner and this difference is the homeowners profit.