Cost of solar in Boston, MA

Electricity Consumption by Massachusetts residents averages 627 kWh per month. It ranks #3 in the nation for savings from installing solar panels on the home.

Are solar panels worth it in Massachusetts?

What solar rebates are available in Massachusetts?

How much do solar panels cost in Massachusetts?

Users on our site have told us that their average utility bill in Massachusetts is as high as $300 per month. Luckily there is a silver lining to such high power prices as they greatly increase the potential savings from installing solar panels on your home. Generous federal, state and utility incentives has made solar more affordable than ever for Boston residents.

What Eversource solar incentives am I eligible for?

Eversource provide net metering and a “SMART” incentive to their solar customers in Boston. The combination of these two incentives means solar systems pay for themselves in as little as 4-5 years.

What is net metering and does it affect my investment?

At times your solar system will produce more energy than what is needed in your home, this excess generation is exported to the grid and purchased by Eversource, net metering requires Eversource to credit you at the retail power rate for each kWh your solar system sends them.

What if my solar system exports more energy than I consume?

This is likely to happen in sunny months where your energy usage is low. Remaining credit at the end of the month is simply rolled over to the next bill still at retail value indefinitely.

How does the new SMART program work?

SMART stands for Solar Massachusetts Renewable Target and is basically a plan for the state to install 1,600MW of additional solar. The incentive works by forcing utilities to pay a credit to their solar customers for every KiloWatt hour of solar generation.

The exact incentive amount hasn’t been published yet however, it has been confirmed that applicants will be able to apply later this year. The incentive works by valuing the power production at a certain incentive rate subtracted by the retail price. This means that if the top tier incentive were to be $0.35/kWh and the rate you pay for power is $0.12/kWh Eversource would have to pay you $0.23/kWh for each kWh your solar system produces.

You receive these credits alongside your net metering returns.

Massachusetts provides a tax credit for 15% of the net cost of you solar system (cost after all other incentives). The incentive is capped at $1,000.

How much will the federal solar tax credit save me?

The federal solar tax credit is set at 30% of the cost of your solar system. To be eligible you must have a federal income tax liability.

We have a great article on this topic. However, in short you can claim the incentive in increments over up to 10 years.

How much does a solar system cost in Boston?

You should be able to get a solar system with good quality components for about $3.27/Watt in Boston. This would put a standard size 6kW system at $19,620 before claiming tax credits and any other incentives.

How much power do solar panels produce in Boston?

Our map tells you how much each kW of solar will produce per day anywhere in America. For Boston a 6kW solar system produces about 7,008kWh per year.

How long does a solar system take to pay for itself in Boston?

If you take the 7,008kWh of solar production each year and multiply it by $0.23/kWh, you will see your potential yearly savings from the SMART incentive is $1,612 per year. If you’re paying $150 per month for power then factor in an additional $1,800 per year savings from avoided power costs.

This means if you size your system correctly you can accumulate $3,412 per year and pay for your solar system in only 3 years and 9 months. Remember this estimate does assume a very ideal situation however, based on feedback from our site most solar systems in Boston pay for themselves in 4-5 years.

Even if you are not convinced about solar we recommend that at the very least you use the solar panel calculator for Boston to find out: 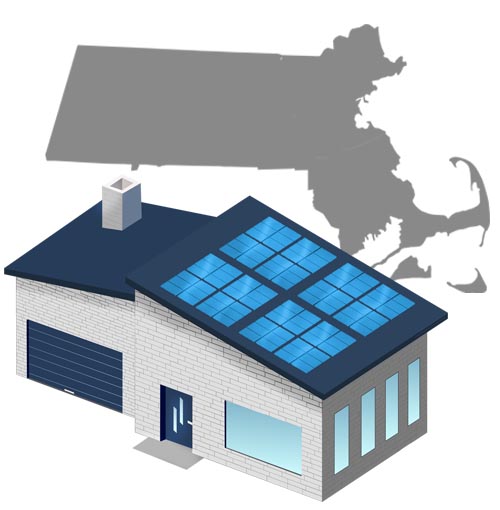 The average cost of installing residential solar panels in Boston, Massachusetts in 2020 is $2.78 per watt. The average system size in the US is 6 kilowatts, which means the average price of a solar system in Boston, MA is $13,900. (before claiming 26% tax credit and other rebates)

Facts about installing a 8.2kW solar system in Boston, MA

This system would offset 100% of your energy usage if your typical monthly bill is $236, however your situation may vary so try our Boston solar calculator to get a result tailored to you.

Cash flow graph based on cash purchase of this 8.2kW system

Solar companies in Boston, MA that provide pricing through the Solar-Estimate marketplace

Check out all of the ways energy providers of Massachusetts can help you be more energy efficient and save money.