Solar-Estimate.org is arguably the most used home solar estimator in America today with over 2 million unique site visitors per annum.

It was the first web-based solar cost and savings estimator released in the United States. The first version of Solar-Estimate.org was built by Scott Cronk between 2008-2010 with the help of a grant from the US Department of Energy (DOE).

The first version of the solar calculator was built with close support from the National Renewable Energy Laboratories (NREL). NREL provided the solar production data for each weather location in the United States, as well as data modeling the effects of varying roof directions and slopes on solar energy production. The NREL calculator PV Watts is still used today by almost all professional and consumer solar design and estimating tools, including the Solar-Estimate.org calculator.

The purpose of the grant from the DOE was to allow Solar-Estimate.org to offer financial analysis capabilities to consumers such that they might get an idea of the cost of installing solar panels and likely savings before speaking with solar companies.

The Solar-Estimate.org has remained a free ballpark solar estimation tool for consumers to this date.

Why does Solar-Estimate exist and what need does it fill?

Solar-Estimate.org exists to provide an easy-to-use ballpark solar estimator so that homeowners can get a rough idea of the solar potential of their home before deciding if they want to talk to a solar company.

There are already 2 million solar installations in America and there are millions more homeowners who are thinking about installing solar panels on their roofs to save money on electric bills.

These people need a very easy way tso get a 70–90% accurate estimate because they do not have the information to use tools that deliver a 100% accurate estimate. This estimate doesn’t guide their decision to buy solar. It only serves to help them decide if it is worth their while to speak to solar companies.

There is a trade-off between ease of use and accuracy when it comes to solar estimating.

Why is the Solar-Estimate.org calculator more accurate than most other web-based calculators?

There are four reasons that the Solar-Estimate.org calculator is more accurate than most solar calculators on the internet:

Why is the Solar-Estimate.org solar panel cost calculator easier to use than professional solar design software for consumers?

We estimate over 80% of people do not know how many kilowatt hours of power they use per month or per year. However, they do know the dollar value of their electricity bill and this is why we have designed a solar panel cost and savings calculator that is usable for such people.

It requires only knowledge of the $ amount of your most recent month's electricity bill and your zip code to generate an estimate. This ease of use is why it is used by more than 2 million people per year to get a solar estimate for their home or business.

What other leading solar industry websites rely on Solar-Estimate.org for solar cost and savings estimates?

It takes a lot of work to gather and curate accurate and reliable information about solar panels for home in all the different jurisdictions around the United States. It takes even more work to keep this information up to date in a rapidly changing policy and technology landscape. This is why a number of other leading industry bodies link to and rely on information and tools provided by Solar-Estimate.org including: 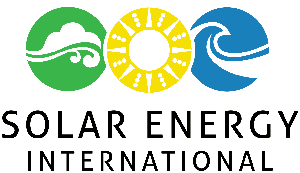 What other solar-related websites does Solar Investments Inc provide?

Andrew Sendy's company Solar Investments Inc. owns a number of other specialty solar websites and solar software tools (including Solar-Estimate.org). However, the company is not involved in any solar installation or distribution businesses in the United States directly.

Cutmybill.com: This is the only solar calculator available on the internet for free use by consumers that accounts for the effects of time-of-use electric billing on a homeowner’s savings from installing solar panels. It also shows consumers the cheapest electric rate plan available from their utility company by estimating their pattern of electric usage both over the day and over a month. These estimates are from EIA modeling of electric use patterns in various climatic locations.

SolarPanelTalk.com: The leading solar panels technical forum in the United States for discussion of all things related to solar panels for homes as well as for other portable and off-grid applications.

SolarReviews.com is the leading reviews website for the residential solar industry with reviews of solar companies and solar panel manufacturers as well as expert ranking of various brands of solar equipment.

SunNumber.com: Sun Number is most well known for providing Sun Number scores for approximately 84 million American homes that are listed on the Zillow website. Sun Number has provided this functionality to Zillow since 2016. Sun Number was the first web service in America that measured the effect of shading on particular homes and used this as part of a wider formula to calculate a Sun Number for a home. The shade calculation software uses LIDAR data that is collected by government authorities around the country and then uses a sun path algorithm to assess any shading at a particular point. This functionality is now being incorporated into the Solar-Estimate.org solar calculator to give more accurate solar energy production calculations.

How do we make money?

Solar-Estimate.org is a for-profit solar lead generation company. Solar-Estimate has a team of web developers and data analysts dedicated to providing up-to-date and accurate pricing information for prospective residential solar consumers in the US.

The solar industry in the US can be very confusing due to federal regulations, varied solar incentives per state, and varying utility contracts throughout the country. Solar-Estimate.org has a content development team whose core goal is to provide helpful information to anyone who has questions about the solar industry.

Internet users who complete the Solar-Estimate.org calculator are provided with estimated pricing based on many factors including their location and home size. Once calculator users agree to be contacted by local installers, the information is then passed along to the local installers.

How much will solar panels really cost for your home?

How much will solar panels really cost for your home?