Calculate costs and savings for a home solar system without solar battery back up.

Calculate costs and savings for a home solar system without solar battery back up.

Powered with technology from 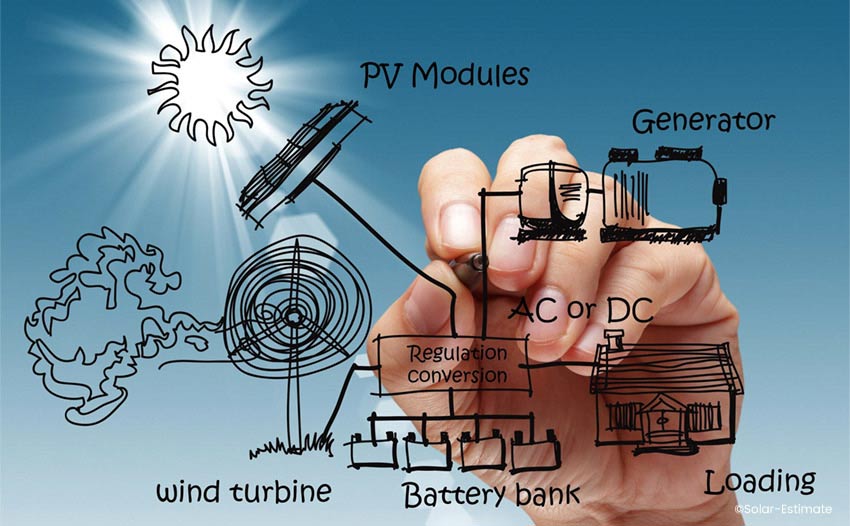 When Will Energy Storage Be A Mass Market Reality?

The solar power market, which prior to 2011 was considered strictly a niche market in the United States, has expanded so quickly in the past five years it's been almost breathtaking.

In part, the rapid expansion is the result of falling component prices as new technologies and manufacturing advances have caused the prices of solar modules to plummet. This, in turn, has spurred an installation boom that contributed $154 billion in U.S. economic effects in 2016, according to research by The Solar Foundation.

Interactive map from The Solar Foundation (TSF) shows the impact of the solar industry at state, metropolitan area, county, and congressional district level for the United States in 2016

Now the industry employs 260,000 people—mostly installers—and created one out of every 50 jobs in 2016 and shows few signs of slowing down, especially as more cities and states commit to running on 100% renewable energy.

Still, despite all its growth and its popularity among the American public (for years, solar energy has enjoyed at least 90% support in most polls), it currently only produces only 1% of electricity nationally.

What Is Holding Solar Back?

Even in states with high insolation rates (i.e., consistently high levels of sunshine for most of the year) like California and Arizona, the sun does set. And it does so at the most inconvenient time—when many people are returning from work or school and need to accomplish the mundane tasks of everyday living: running the dishwasher, doing laundry or doing homework by the light of the dining-room chandelier.

All those activities require consistent levels of electrical production which, in the case of solar panels, means the sun has to be shining—or that households have energy storage systems on site. The quest to find an energy-storage solution that could be manufactured and used on a mass scale is the Holy Grail of solar right now. And the company that finds an adequate technology that can be easily replicated will be the one to lead the next step in the solar revolution.

And that's the $64 billion question: When will solar storage reach critical mass so it will be inexpensive enough to be in every home that wants to install solar? Fortunately, newly released research suggests that time might not be as far in the future as previously thought.

Battery Storage, By The Numbers

When most people think of solar + battery storage, they think of old-style solar users: people who didn't want to connect to utility grids, so they moved into the middle of nowhere and needed a battery to keep their homes running. And, until now, that's been an accurate picture.

Recent research by GTM Research, the most respected research firm on the U.S. market, said out of the 4,400 battery-storage systems installed in 2016, 86 percent of projects were off-the-grid. In 2017, however, that balance is on its way to being reversed.

Predictions based on the numbers collected already suggest 57 percent of 2017's battery storage projects will actually be grid-tied instead of off-grid or grid independent. By 2022, GTM expects that number to skyrocket to 99 percent. So what's going to change?

First, policies like the ones in Hawaii, California and some northeastern states that are currently encouraging battery-system development will spread to other states, producing much more friendly conditions for battery installations in homes. In fact, there are currently states designing renewable-portfolio-standard-like goals for energy storage (California and Massachusetts are two of the most prominent, but there are others).

In addition, the California legislature recently passed a law that would halve the amount of time it would take to get the permits for energy storage systems. While the state's governor, Jerry Brown, has not signed the legislation yet, solar industry observers fully expect him to do so.

The race to find the winning technology could get more than $50 million in support if two U.S. Senators get their way. Recently, a bill was introduced to the Senate—the Advancing Grid Storage Act—that would provide the money to the research arm of the Department of Energy to find new battery technologies with the goal of driving down the prices, which currently range $3,000 to $5000 each. If the bill ever manages to pass Congress, deployment of battery storage will reach warp speeds.

Thirdly, utilities will start devising their rates to reflect battery storage, which helps them by taking critical load off the grid when they need the load to be managed more effectively.

A recent ruling by New Mexico's Public Regulation Commission (NMPRC), which oversees the state's utilities, has instructed its utilities to include energy storage solutions in their next long-term-planning filings with the commission.

It was amending the data requirements for those reports because the 2008 regulation surrounding them were out of date. Nine years ago, the solar industry barely existed, and battery storage wasn't even a serious consideration. And what energy-storage technology existed wasn't sophisticated enough and was too expensive to warrant consideration. But with new technologies available and prices coming down, the NMPRC decided the time was right to add it to the data requirements included in the reports.

As battery storage continues its expansion, more utility commissions will follow New Mexico's lead—and once that happens, the market should expand exponentially. Are batteries for solar-energy storage systems ready for the mass market right now? No—but as the most recent research shows, the future maturation of the market isn't that far into the future. When it does mature, solar will expand into places formerly thought unsuitable for the technology. After that, the only thing limiting solar electricity will be the imagination.