Weigh the pros and cons of solar panels in your area

Weigh the pros and cons of solar panels in your area

What are the pros and cons of solar roof tiles? 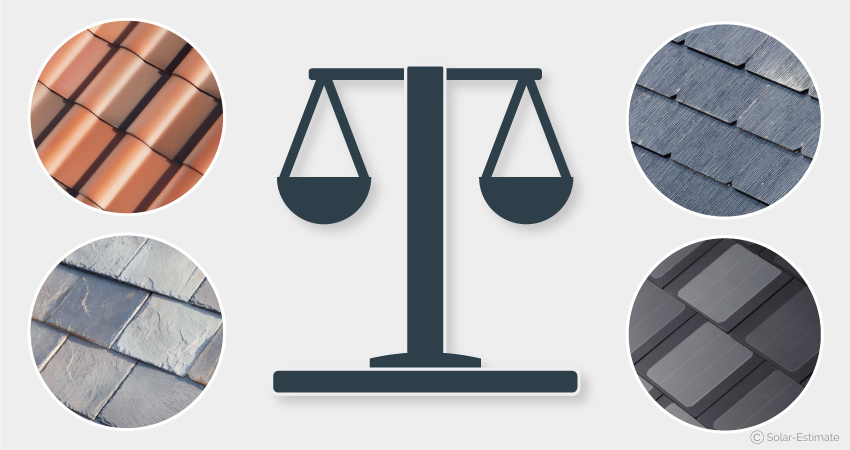 In recent years the combination of physical aesthetics and solar energy has created a unique market for solar roof shingles. Products by Tesla, CertainTeed, and SunTegra provide a nice looking roof that also powers your home.

How much do solar roof shingles cost?

The cost of your solar roof will depend on your electric usage, how much of your utility bill you wish to offset and the brand you decide to purchase from.

The Tesla solar roof is by far the most aesthetically pleasing option but also the most expensive. According to Tesla’s calculator, for a $200 per month electric bill and an average sized 3,000 sq. ft. roof, it would cost $60,900 for a roof with only 30% of the tiles producing electricity. This system would produce $105,600 worth of power over 30 years and take 15 years for you to break even on your investment.

If you opted for a system with 50% solar producing tiles it’d cost $79,500 and take 12.5 years to pay for itself even after the 30% federal solar tax credit. The truth is Tesla’s solar roof just isn’t financially viable for most people especially when in many parts of the country solar systems only take 5 years to pay for themselves. Regular solar systems, however, don’t also function as a roof.

Even if you added the cost of a roof and the cost of a standard 6kW solar system together, it’d still be at least $16,299 cheaper than the Tesla solar roof. The only real thing going in Tesla's favor with this product is that they look amazing and perform two functions.

The cheaper shingles only cost about $4 per watt meaning a conventional 6kW system would cost $24,000 and $19,200 after the federal ITC. Sadly the cheaper price tag means you don’t get the same great appearance as the Tesla solar roof.

CertainTeed’s high efficiencies - 15.4% for shingles and 16% for tiles - match almost that of conventional solar panels. Like the SunTegra range, Apollo’s products require an existing roof to be installed on, and can also function as a roof. Their cost is almost identical to SunTegra and a 6kW system after the federal ITC should cost around $19,200 assuming their shingles were used. If you were to purchase the tiles instead, it would cost roughly $27,300.