Are Tesla solar roof tiles worth it? 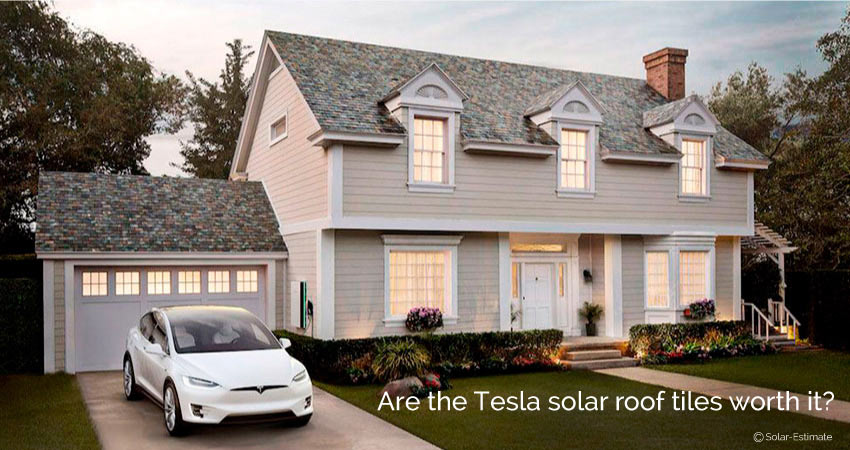 The rollout of the first Tesla solar roof tiles proved to be another defining victory in the Tesla story. It started with their iconic Tesla cars and has now grown to include Tesla solar panels and the Tesla home battery - Powerwall.

Where did the inspiration for the Tesla solar roof come from?

The technology behind the first solar roof tiles (also called solar shingles) was developed in the 1970s. Since then, several companies have attempted to produce a solar medium that would look and function like a traditional roofing system and also replace traditional solar panel add-ons.

While building integrated photovoltaic (known as BIPV) options aren’t a new concept, the Tesla’s Solar Roof products have taken aesthetics to a whole new level - just as Tesla Motors have done with their electric cars.

How much does a Tesla solar roof cost compared to regular roofing materials?

The Tesla solar tiles are a premium product. Constructed of thin layers of quartz - they are virtually unbreakable. While price estimates may eventually vary depending on location and installation costs, Tesla insists that their solar roofing tiles will sell for a price of $21.85 per square foot. The cost of regular roofing materials is between $1-$2 per square foot for asphalt shingles.

At $21.85 per square foot, the Tesla solar roof price for a 2,500 square foot home is around $54,000. This cost has been one of the reasons Tesla solar roof installations have been slow through the last half of 2018. However, while the upfront costs are expensive for Tesla solar roof customers, Tesla claims that the solar roof tiles will last a lifetime whereas conventional roofing materials might only last 10-20 years.

What is the Tesla solar panel roof?

Tesla roof panels are unlike traditional solar panels in that every tile contains one solar cell. They not only look like, and function as, conventional roofing materials, such as terracotta, slate, or asphalt, they also produce electricity!

The Solar Roof line of products is unique among other solar options because it doesn’t resemble a typical solar installation. Every solar cell is embedded invisibly within every glass tile. The tiles are then installed like traditional roofing shingles or tiles. If you didn't know the roof was a Tesla product, you’d probably never realize it.

Unlike other solar products, Tesla systems are designed to collect up to 98 percent of the solar energy that traditional arrays collect. The unique type of louvered glass tile works in much the same way as window blinds by reflecting sunlight to appear opaque while still absorbing the rays of the sun.

The electricity generated by the solar roof tiles is then used to power your house - and possibly also to charge the Powerwall battery if you choose to store your solar energy for later use. Tesla tiles can be installed on new construction, as part of a re-roofing project. For the pros and cons of installing energy storage with your solar panels check out our blog.

What are the savings and investment returns for a Tesla solar roof in states with different power costs?

There’s a 30 percent Solar Investment Tax Credit that homeowners can qualify for that applies not only to the cost of the tiles but also to any associated equipment and the cost of one or more Powerwall batteries for your system.

To qualify for the full tax credit, it’s a must to have federal income tax liability equal to the value of the amount of the tax credit. Luckily, this can be carried over to subsequent tax years. Additional utility, local, or state tax and solar incentives may apply. Early estimates say the average return for a 1,800 square foot home in California is nearly $88,000 in saved energy costs over 25 years. However, this is an average, and the actual result will vary a lot from house to house.

To find out the potential solar savings at your house based on your location, power use, utility rates for power and roof you can use our solar savings calculator.

What are the advantages of Tesla solar roof tiles?

Although the upfront investment seems high, there are several advantages to installing Tesla solar tiles on your roof:

Can it be argued that the Tesla solar roof has an attractive investment return?

One of the reasons investing in Tesla roofing tiles is attractive is because it’s not necessary to reshingle your entire roof to take advantage of the solar benefits. If your roof does need replacing, Tesla recommends only investing in replacing between 35 to 50 percent of your roof with solar tiles.

While the initial price of Tesla's Solar Roof may look intimidating, estimates indicate that the owner of an average 3,000 square foot home would pay around $60,000 for a Tesla solar roof, compared to a traditional installation of approximately $26,000.

How much can you save by going solar?

Can solar incentives and tax credits be applied to Tesla solar roof tiles?

YES...In the United States, until 2019, homeowners who choose to install a partial replacement or full roof may qualify to deduct 30 percent of the costs from their taxes. Unless Congress extends the deadlines, after 2019, the credit drops to 26 percent. Starting in 2020, it drops to 22 percent, and after 2021, residential solar investors will receive no credits.

Tesla will be offering certification training to installers who will be able to properly install the right type of tile in the correct area(s) of your roof. Tesla is already taking solar roof pre-orders.

What can you do while you are waiting for Tesla solar roof tiles to become more widely available?

It is hard to know when all of the styles of the Tesla solar roof will be available and, given the federal solar tax credit steps down at the end of 2019, we would recommend that if you own a house that has a roof in reasonable condition that you get solar quotes on conventional solar panels. Traditional solar panels will work out cheaper.

However, if you are building a new house and so need to wait anyway, a Tesla solar roof would be an excellent addition to ensure your new home has a roof that will last and solar energy to meet your needs now and into the future.